Let us begin by learning proper hydraulophone technique for a very simple song, "Twinkle Twinkle Little Star" that most people already know how to play on the piano, organ, or on other instruments.

Once you understand hydraulophone technique for this song, you will be able to play most other songs on the fountain, using the same basic principle.

The key technique in playing hydraulophone is getting a good hydraulic bond between your fingertips and the hydraulic fluid (water) emerging from the fountain's water jets.

Try to keep your fingertips in contact with the hydraulic fluid so that you can manipulate the sound continuously.

Practice changing the volume of the flow, as well as the pitch, timbre, etc.. You can droop down in pitch to give the music a sadder sound, or to play microtonally (partway between semitones) by the way that you press down and manipulate each water jet.

In this lesson we will learn how to play harmelodically, i.e. how to play an overlapping harmony and melody.

The melody for Twinkle Twinkle Little Star goes as follows, with FIG. (figure illustration) numbers corresponding to the figures further down this page:

Harmelody indicates the combination of harmony and melody, i.e. capital letters for loud notes and small letters for quiet notes (e.g. Ceg means a strong C with a weak e and weak g). We'll illustrate this in what follows:

First, stand so that the water jets spray away from you. (Unlike the hydraulophones used in public pools that spray inwards, hydraulophones in civic spaces usually spray outwards.) You should be able to comfortably reach all the jets. Since the fingerboard is nicely curved, the instrument "wraps around" you:

We begin by finding "C":

Note that the finger holes on the row closest to you are evenly spaced. These are the natural tones that correspond to the white keys of the piano.

The holes on the row further away from you are irregularly spaced. Notice how they are in groups of 2, 3, 2, 3, and so on. These are the sharps and flats, i.e. the tones that correspond to the black keys of the piano.

To find a "C", locate any group of two jets in the far row, and then locate the jet in the near row that is just to the left of this group of two far jets.

With hydraulophone, we prefer to play mainly with the three middle fingers, and seldom use the thumb and small finger. You get more control over vibrato, timbre, and microtonality that way, than you do with your thumb or small finger. You also get more control with the soft fleshy part of the fingertip, where you make a nice hydraulic seal, than you do with the fingernail or with the side of the finger. Since the hydraulophone is self-cleaning, you can use your feet as well, in order to make up for the fact that humans only have six really hydraulophone-friendly fingers (three on each hand). This hydraulophone technique (chords with left hand, harmelody with right hand, and bass line with left foot) is shown here (live performance at the Kensington Market Water Festival), and here.

Now, looking at your three fingers on the three holes, pull back just a little bit on the two fingers that are covering the E and G holes.

The water should shoot up in a nice arc, a few feet in front of you. As you pull back, you can see the change in the shape of the arc. This changes the way in which the hydraulic fluid is forced into the E and G pipes. Notice how this changes the sound.

With a little practice, you should be able to get a C-major chord in which the "C" is emphasized (i.e. the C pipe is playing loudly and the E and G pipes are playing softly).

Ceg
Notice that the strongest (loudest) notes result in no visible water spray because all the water is being forced into the hydraulophone pipe. In fact, it's the two quiet notes that are most visible as only some of the water is pushed into the hydraulophone, and the rest shoots up really high. Now, while keeping your fingers hydraulically "attached" to the jets, ease off on all three jets, so that all you can hear is the "c". You can re-iterate the "c" if you like (i.e. ease off on it completely and then "hit" it again). You can create a nice smooth and gentle transition from "Ceg" (loud C and quiet e and g) to a quiet "c", and you can "ride" the "c" down and up, as shown below:

c
Notice here that the "e" and "g" fingers have pulled back so far that these jets are no longer appreciably blocked, and thus the "e" and "g" notes are silent or nearly silent.

Note that one has to study the pictures carefully to see the difference between fully blocked jets (loudest) and fully unblocked jets (silent or very quiet), because of the subtle visual difference between these two extremes, whereas the in-between state (medium to quiet sound level) causes the dramatic and highly visible stream that often sprays high above your head.

ceG Now ease off on all three jets, so that the "c" and "e" drop below being readily audible, and the strong "g" becomes a weak "g". What you should hear now is a weaker "g" than before, but the "g" should still remain much louder than the "c" and "e", as shown below:

cfA Now ease off on all three jets while keeping the "a" louder than the other two:

Now change back to C-major with the emphasis flowing smoothly back to "G", as shown below:

Now take a rest for one beat. During this rest, you can keep your finger lightly on the root note, "c". In fact, the "c" should drone just a little bit for the entire first phrase of the song as well as during the rest. Alternatively, you can continue to sound the C-major chord for an extra beat, perhaps fluidly changing the emphasis from "ceG" to "ceg". Now, for the eighth beat of the song, change to an F-major that has emphasis on the "F", as below:

cFa Ease off on all three jets:

f Change to C-major with emphasis on E:

cEg Ease off on all three jets:

e Change to G-major with the emphasis on D. This is the first time since the beginning of the song that the your finger will need to be completely off the "c" jet, so you could have been making a nice faint "c" drone all the way up until you now change to G-major:

bDg Now ease off on all three jets so that all you hear is "d":

d Now return to C-major with the emphasis on C:

Ceg Now try putting both hands on the instrument and playing the bass-line or harmony with your left hand, while playing the harmelody with your right hand. Practice simple songs that you already know, and in a few minutes you'll be able to play very smoothly varying harmelodic arrangements of the songs you know, or new compositions.

To make further use of the fluidly flowing introspective and expressive capabilities of the hydraulophone, try it in a minor key, as illusrated below, where I introduce a new musical notation called "Fluid Music Noation". The width of the trace denotes the strength of the hydraulic action: 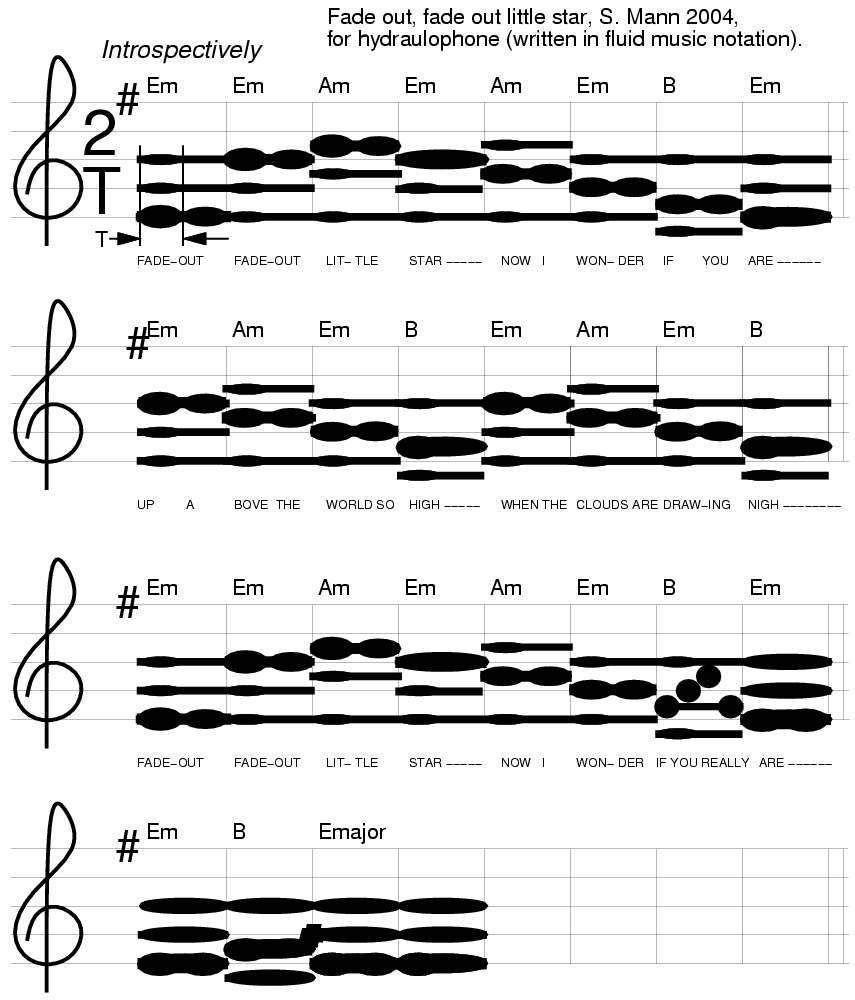 Now watch an excerpt from a live performance of Janzen's "Suite for Hydraulophone" and notice how the musician's fingers flow fluidly and harmelodically.